Since 2007 the Keep It Out campaign has generated over 1,900 tip offs of illegal tobacco being sold from shops, tab houses and other locations within the North East and over 7,600 nationally. The crackdown is part of wider efforts to make smoking history for future generations. All tobacco kills, but illegal tobacco gets kids hooked on a lethal addiction and its cheaper prices undermine smokers’ attempts to quit.

That has led to seizures, court action and shops facing closure orders and fines. But what happens when you report the sale of illegal tobacco? Trading Standards lead Kate Pike co-ordinates intelligence for the campaign and explains more:

Kate said: “Most people don’t want illegal tobacco in their local communities, whether they smoke or not.

“One of the main problems is that it enables children to try and buy cigarettes. No parent wants their child to smoke and there are so many reports of children buying it as most dealers think nothing of selling to children. We know from research that most children over 14 who smoke have been offered and have tried illegal tobacco.

“But illegal tobacco is also linked to crime. You might think “it’s just John at the end of the street selling a bit of duty free” but those cigarettes are most likely on the end of a long chain linked to criminals and smuggling networks in the UK and abroad. Major court cases have linked people involved in illegal tobacco with drugs and people trafficking.

“Over the past few years we have seen concerted action by local authorities on illegal tobacco and thousands of pieces of information and intelligence that helps them to do so. We are grateful to every single person who makes a report, as each piece of intelligence helps us build up a picture of illegal sales and the action we need to take.

“We receive anonymous reports from the public when they make an anonymous online report at www.keep-it-out.co.uk, but we also receive intelligence from other sources – from the Police, from HM Revenue and Customs, from other partners and sometimes directly from businesses or consumers. The great thing about the Keep it Out website is that you don’t need to provide your details…..

“All of these reports are logged onto an intelligence database. We assess each report, consider the most appropriate response and assign a priority rating. We protect the reporter at all stages of the process. Often, we need additional information to confirm reports, which may involve checks on other systems or sometimes surveillance on the premises. 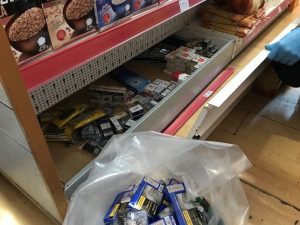 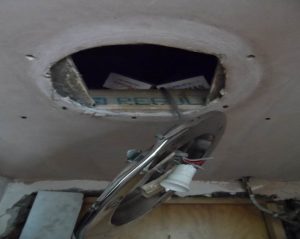 “Once it’s clear we need to visit the premises, we consider the best way to do it. That might involve a detection dog, perhaps visiting a number of local premises. But sometimes the intelligence we’ve received gives enough information to be able to find the tobacco.

“Criminals think they are being very clever with the hidden spaces they build in their shops to store the tobacco. However it never deters us from searching. And dog treats do not deter sniffer dogs whose sensitive noses can still smell the toxic cocktail of deadly components that all tobacco contains. 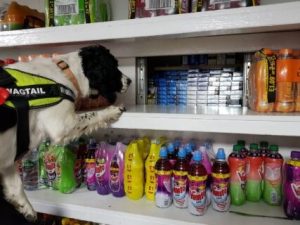 “Once the tobacco is found, it is seized and taken away. We then decide which penalty is best to use. It often includes prosecution which for persistent offenders could lead to a prison sentence. Often there will be coverage in the local media.

“However, we can also apply for removal of a shop’s alcohol licence or lottery terminal – as they have shown they are not a fit and proper person to have the privilege of being a licence holder by disregarding the law. There are also processes we can go through to have premises closed down or banned from selling tobacco at all for a period of time.

“It’s always worthwhile reporting the sale of illegal tobacco and giving as much information as possible. Every piece of information can be seen as a jigsaw piece which helps us see the full picture.

The criminals behind the illegal tobacco trade don’t care about your children, your community or you. If you know anything please tell us – you can report it anonymously here https://keep-it-out.co.uk/anonymous-reporting/